Another nail in the coffin of biodiversity? 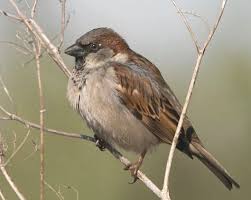 When I was a kid growing up in the UK, the humble sparrow was often looked upon as a pest. Since the mid-1980s, however, its numbers have been steadily falling. A report on BBC news today reveals that the sparrow population is estimated to have fallen by 68% in the past three decades.