With the election of Barack Obama, I was confident that, at long last, there would be a change for the better in US policy on the environment. Indeed, compared to the Bush administration, there has been a significant change in policy stance but it seems, however, that rather than change public perceptions about the dangers of climate change, the zeitgeist is moving in the opposite direction. Gallup poll results published last week show a worrying trend, and a sign, perhaps, that the power of vested interests are not to be under-estimated. The bad publicity over the so-called climategate fiasco has clearly added wind to the sails of the climate change skeptics, even though this affair was a major beat up (the facts not getting in the way of a good story). Nevertheless, it might be time for the Obama administration to crank up its environmental education machine a notch or two. It can’t rely solely on Bill Maher.

Much has been made of the cow fart problem and its contribution to methane levels in the atmosphere. Methane is a greenhouse gas and, while it is present in the atmosphere in much lower quantities, it is capable of trapping some 20 times more heat than CO2. The methane emanating from the rear ends of ruminants like cattle is certainly a problem and there are studies underway researching how diets might be altered to reduce these ’emissions’. However, more of worry, perhaps, is the methane being released from the melting permafrost in Arctic regions. A report in The Guardian yesterday details how there has been a 30% increase in methane emissions from this source in the last five years. With the positive feedback mechanism, this could get a lot worse pretty quickly.

Are you climate fit or climate weak?

It’s occurred to me many times that being prepared for climate change is not necessarily a function of wealth — at least not how wealth is defined in the West. Consider, for example, a family living in Singapore versus a family living in Laos. Very much First World and Third World in classic economic development terms. But which family would be able to cope best if (the increasingly likely) worst case scenario were to eventuate? Singaporeans get their imported food from supermarkets and their (Malaysia-sourced) water magically appears when they turn on the kitchen tap. They are anything but self-sufficient. Their Laotian counterparts, on the other hand, have a much stronger connection with the land and are, therefore, far more likely to be able to adapt if — as a growing number of ecological economists are predicting — climate change has significant ramifications for food security.

Communities within countries will also differ in terms of preparedness for a whole variety of reasons, as Gaia Vince points out in her recent piece entitled: Coping With Climate Change: Which Societies Will Do Best?

Is It Too Late to Prevent Catastrophic Climate Change?

People in 181 countries are coming together today to take part in arguably the most widespread day of environmental action in history. An estimated 5200 events are scheduled to take place around the world, to call for strong action and decisive leadership on the climate crisis. The main objective is to draw attention to the science of climate change and what constitutes an acceptable level of CO2 in the atmosphere. The figure is 350 parts per million (ppm); hence the formation of 350.org. Right now, it is around 389 ppm. Meanwhile our politicians are saying that 450 is politically realistic. If you agree with Clive Hamilton, then 450 is simply not acceptable at all. This speech, entitled: Is It Too Late to Prevent Catastrophic Climate Change? was delivered in Sydney at a meeting of the Royal Society of the Arts last Wednesday, and the message is very depressing.

Lester Brown’s book, Plan B 4.0: Mobilizing to Save Civilization, asks whether we can cut carbon emissions fast enough to save the Greenland ice sheet, whether we can close coal-fired power plants fast enough to save the glaciers in the Himalayas, and whether we can we stabilise population by lowering birth rates before nature takes over and halts population growth by raising death rates. The political imperative looms ever larger as finite resources — long exploited as though they are in infinite supply — become exhausted. Brown makes reference, for example, to Saudi Arabia which, in early 2008, announced that it would no longer be self-sufficient in wheat because the non-replenishable aquifer it has been pumping for irrigation was largely depleted. Production will cease entirely in 2016, meaning a population of 30 million will need to import all its wheat. The problem of over-pumping is far more acute in India where 175 million Indians are being fed with grain produced from wells that are running dry, and in China where 130 million are affected. Meanwhile, with the Greenland and West Antarctic ice sheets melting at an accelerating pace, sea level rises are set to inundate much of the Mekong Delta, which produces half of the rice in Viet Nam, the world’s second-ranking rice exporter.

Brown observes that food shortages led to the demise of earlier civilisations such as the Sumerians and the Mayans, and that dwindling food supplies may be the undoing of twenty-first century civilisation as well. “It is decision time,” says Brown. “We can stay with business as usual and watch our economy decline and our civilisation unravel, or we can adopt Plan B and be the generation that mobilises to save civilisation.”

The English version of Home (with sub-titles) is available here.

At one time, I would have dismissed this kind of thing as science fiction, but since becoming a devotee of James Lovelock I am less dismissive of initiatives like these. If Lovelock is right, we have now reached a point where the mainstream sources of renewable energy (wind, solar, geothermal, etc) will not come on stream quickly enough to arrest global warming. Therefore, tech fixes are no longer just an option. The latest idea is for a wind-powered fleet of 1900 ships to traverse the oceans, sucking up sea water and spraying it from the top of tall funnels to create vast white clouds. These clouds would then reflect sufficient sunlight to cancel out the greenhouse effect caused by carbon dioxide emissions. It has been estimated that the fleet would cost $9 billion to test and launch within 25 years, which is a fraction of the sum that the world’s leading nations are considering spending to cut CO2 emissions. What worries me, I guess, is that if such an initiative were to come to fruition, this might cause everyone to relax and carry on polluting with impunity. The fact the cloud ship idea is supported by Bjorn Lomborg serves to add to my concern.

An article in the New York Times last week drew attention to two instances of local governments looking to reduce their ecological footprints in recent weeks. First of all, the Belgian city of Ghent has declared that Thursdays will be a “meatless day” on the grounds that eating vegetarian meals will improve health and reduce the impact of raising livestock on the environment. In Australia, meanwhile, the NSW town of Bundanoon voted to ban bottled water this week to reduce carbon dioxide emissions associated with bottling and transporting the water.

Biosphere 2 not such a flop after all 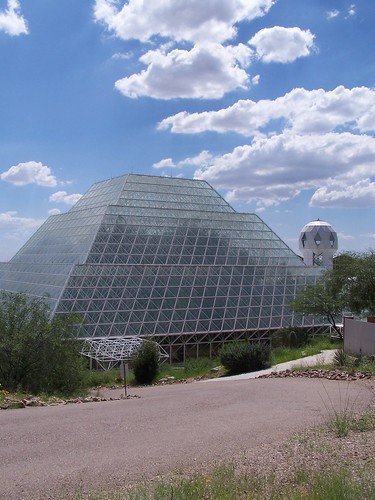 There is an interesting piece in Wired today on Biosphere 2 (B2), the controversial experiment in the 1990s that attempted to recreate biodiversity. It now turns out that it wasn’t such a waste of tax payers’ money after all, because important research is going on that could help us better understand the impact of climate change. The original objective of B2 was real ‘space odyssey’ stuff with eight people being sealed inside between 1991 and 1993. By all accounts, they clashed over the nature and direction of the research, and Time Magazine concluded at the time that the experiment in self-sufficiency was “less like science and more like a $150 million stunt.”

More interesting was a comment on the article from one reader, who wrote:

Another little-known factor was that the original group were associated with a religious group that believed god wanted them to go live on Mars to avoid the apocalypse. B2 was the test platform for the technologies they would use to make this happen. Some consultants warned of the potential O2/CO2 problems before the experiment even started. These concerns were dismissed by the researchers (who held degrees issued by the church’s own university) who claimed that the nay-sayers didn’t understand the “synergy” that would make it all work.

I knew the original venture was a little pseudo-scientific, but I had no idea religious extremists were involved (… and they may not have, it must be said, as I can find no other reference to this claim).