Tianjin, China (one of the ten most polluted places on the planet)
Image source: forbes.com

In the IHT this week, there is an interesting piece (together with the gruesome images) on the Top 25 Dirtiest Cities in the World. There are also slide shows on the world’s densest cities and the world’s most polluted places. These are not league tables that one would want to be part of and the sad thing is, to clean up the worst of the mess doesn’t really cost that much vis-a-vis the benefits. According to WaterAid, for every $1 spent on improved sanitation, the benefit equals $9 resulting from decreased cost of health care and increased productivity. Seems like a good business proposition to me.

END_OF_DOCUMENT_TOKEN_TO_BE_REPLACED

The view from my home office window is not gentle on the eye at the best of times. I am a regular witness to ExxonMobil’s direct contribution to global warming through its oil refinery at Jurong. Today, however, the view is much worse thanks to what Singaporeans commonly refer to as ‘The Haze’. Sadly, it is becoming a regular phenomenon because the Indonesian government does nothing to prevent land-clearing by burning. According to the Singapore Straits Times today, the Pollutants Standards Index (PSI) hit a high of 130 at 10am this morning which is considered ‘unhealthy’. Meanwhile, Greenpeace activists have staged a demonstration [RealPlayer required] outside the Indonesian foresty ministry in Jakarta, filling the building with smoke to make a point.

One of my pet hates is plastic bags. They add millions of tonnes to landfill each year and can take up to 1000 years to decay. In some European countries you have to pay for them, and in other countries there are campaigns to get rid of them or reduce use. Singaporeans, meanwhile, seem to love them. It therefore came as a welcome surprise a month or two ago when my local supermarket introduced reusable shopping bags. The only problem was that they were located beyond the checkout (see above). I walked through to get some and put them on the counter and then, to my astonishment, the woman on the checkout promptly put them inside a plastic bag! I’m not much of a consumer activist, but I couldn’t let this matter drop. I contacted Mr Dennis Tan at Cold Storage Customer Service and he has very kindly intervened. As of last week the environmentally friendly shopping bags are in a prime position (in between the milk and chocolate). All Cold Storage has to do now is train its staff to encourage customers to use these bags.

Too little too late for GM? 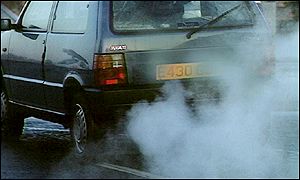 A couple of my bloggerbuddies have recently taken up the cause of pictorially documenting the irresponsible behaviour of Singapore drivers. It is fortunate I don’t drive here as I think they would have a field day following me around the place. Driving one-handed and blocking the thoroughfare are minor offences, however, compared to amount of carbon monoxide churned out each day by ‘careful’ drivers. The amazing thing is that fuel cell technology has been around for years and, with a few exceptions, it is only now that car manufacturers are starting to wean themselves off fossil fuels. For GM it could be their last roll of the dice.

I travelled to Guangzhou in Southern China last week for a few days on business. The air pollution was pretty appalling. The picture above is taken from my hotel window. On my travels, this part of the world is easily the worst for air quality. Aside from the rasping sensation one gets in the respiratory system, it’s pretty depressing not seeing the sun all day. It is quite common to read about the Brits complaining about Seasonal Affective Disorder (SAD). I wouldn’t be at all surprised if people in Southern China are similarly afflicted.

The list of the 2006 Top 100 Most Sustainable Companies was released at the World Economic Forum last Friday, and I must confess to being a little surprised at some of the inclusions. Take British Airways, for instance, how on earth can an airline be identified as being sustainable when it is one of the biggest players in an industry that contributes on such a massive scale to global warming? For example, according to a report in The Observer yesterday: ‘The arguments against flying are compelling. One return flight to Florida produces the equivalent carbon dioxide to a year’s motoring. A return flight to Australia equals the emissions of three average cars for a year. Fly from London to Edinburgh for the weekend and you produce 193kg of CO2, eight times the 23.8kg you produce by taking the train. Moreover, the pollution is released at an altitude where its effect on climate change is more than double that on the ground.’

It would appear as though the methodology employed by Corporate Knights Inc. is a bit suspect. In response to one of the questions in the Global 100 web site FAQ: ‘How can a soft drink company and a weapons company make the Global 100?’, they state: ‘The Global 100 does not discriminate on the basis of how companies earn their revenues. Despite the fact that certain industries face greater social and environmental challenges than do others, some companies within those higher-impact industries may still be strong social and/or environmental performers. We believe that the blanket exclusion of companies based solely on which sector they belong to is a short-sighted approach, as there are no two companies exactly alike.’

Interesting argument me thinks … rather like saying it’s okay to murder so long as you don’t rape and pillage.

I love France and French people generally and I try and get to France at every opportunity. OK, so the Gitanes aren’t great for one’s health in enclosed public spaces, and you have to traverse public footpaths with some care on account of the high preponderance of dog turds that litter the pavements, but these things I can put up with because the French culture and lifestyle suit me so well. What never ceases to shock and stun me about this country, however, is its utterly appalling and quite reprehensible lack of concern for those on the receiving end of ill-conceived nuclear policy. The Rainbow Warrior fiasco will never be forgotten, nor too will the nuclear tests carried out the Pacific. The latest debacle surrounding the Clemenceau is also likely to stick in the memory banks for some time to come. This time it’s asbestos.

END_OF_DOCUMENT_TOKEN_TO_BE_REPLACED

A film clip on BBC World today makes for compelling viewing. In a bid to project itself as the next Shanghai, with all the glitz and prestige that goes with being one of the world’s leading commercial centres, the Maharashtra state government is attempting to clean up the city’s image by forcibly removing slum areas. My Indian friends reliably inform me that this sort of thing happens periodically, and that this particular ‘backyard blitz’ has been on the cards since the Maharashtra assembly elections in October of last year. It was at this time that Prime Minister Manmohan Singh went on the record as saying that the government would transform Mumbai into another Shanghai by 2010 as part of a larger plan of urban renewal.

According to a recent report by the Indo-Asian News Service, 60 percent of Mumbai’s 16 million people are living in slums, and over 90,000 ‘hutments’ have been bulldozed since last December, specifically those constructed after 1995 (those erected before this time are protected by law). The problem is that, once these dwellings are flattened, the owners are rendered homeless, leaving them to compete for space along with the 1,000 migrants coming from poor states to Mumbai every day looking for work. Tragically, real estate prices in Mumbai are so exorbitant, even people with reasonable incomes are forced to live in slums. Urban renewal is obviously desirable, but a forward looking government might be seeking to address the cause of overcrowding in metropolitan areas rather than the symptoms. In the meantime, it is probably a good idea to rehouse people before knocking down their current homes! As for emulating Shanghai, on the basis of my experience there a week or so ago, the Maharashtrans might consider looking for alternative models. The congestion on the roads was just as bad as Mumbai, and the air quality a lot worse (as the picture below reveals).