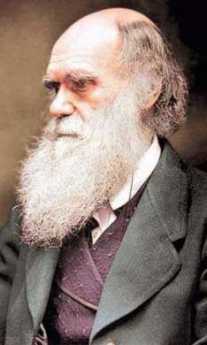 Born on 12 February 1809, today is Charles Darwin’s 200th birthday. I commemorated the event by purchasing a copy of On the Origin of the Species at the weekend, and I’ve also been lapping up the media coverage surrounding the anniversary over the last week or so. There is a provocative piece in The Australian today arguing that the Right should warm to Darwin, but my personal favourite is the one that appeared in the Tehran Times yesterday (the link is broken at the moment but it also appears here) which insists “Darwinism is the root of terrorism”. Harun Yahya, is a prominent Islamic creationist who maintains that atheism “is active right across the world, hurting and literally damning people” and it is Darwinism — “the foundation of godlessness, of all atheist ideologies” — that is the source of all these troubles. Employing this logic, he would presumably have no objection to the position taken by Christian creationists. Never let science get in the way of a good story I suppose.

Diary of a Pakistani schoolgirl

The news coming out of Pakistan about the expanding influence of the Taleban is a real worry. Sadly, given the focus on the economic downturn in the West, this is an issue that is not getting the air time that it warrants. Maulana Fazlullah (a.k.a “Radio Mullah”) and his followers are wreaking havoc in the Swat Valley in the Northwest Frontier Province and, among other things, include the burning of girls’ schools in their repertoire. Over 130 schools — mainly girls’ schools — have been destroyed in the past year and, not surprisingly, female enrolment in Swat area schools has fallen from about 120,000 to under 50,000 since 2007. This is set to get worse after it was announced by the Taleban that there would be a ban on education for girls from 15 January. The explanation for this is that sending girls to schools is against the teachings of Islam. The ongoing publication by the BBC of a Diary of a Pakistani schoolgirl makes interesting reading.

Somehow I don’t think it will get too much airplay in the US presidential elections, but the Taliban are flexing their muscles in the North West Frontier Province (NWFP) of Pakistan, and are no longer hiding in the hills. They are coming down from the tribal areas near the Afghan border all the way into Peshawar, terrorising everyone in their wake. I wonder what Sarah Palin’s view is on this.

Chatting with a work mate the other day about the latest human disaster story to unfold in the Middle East, my friend–a devout Christian–lamented that it was quite likely the world would be in a state of perpetual conflict until there was but a single religion. As a fully paid-up secular humanist one might imagine that I’d subscribe to this view. I don’t make a secret of the fact that I have an extremely low regard for the Catholic Church which has managed to screw up more people I know than I care to mention, and my concern about the rise of religious fundamentalism around the world (whether in the US midwest or the suburbs of Tehran) I have blogged about on a number of occasions. Yet, reflecting on my friend’s comment, I can’t help but think (in my economically-deterministic way) that really religion is just a side-show. Muslim, Jew, Christian, Hindu … what does it matter? It could be Chelsea, Arsenal, Liverpool and Man U, or some other cosmetic way of grouping people. I mean no disrespect to mainstream religions because everyone has the right to worship in the way they choose. My point is that, ultimately, it’s about human well-being and social justice (or the lack thereof).

The problem is that peaceful co-existence (which includes religious tolerance) is not an attractive option for those who seek material gain at the expense of others. The Israelis copped a hiding from the international community today after the bombing of Qana which left 54 refugees dead (including 37 children). No parent can watch the horrific images beamed around the world and not be deeply affected by them. The sympathy vote for Israel (to the extent there was one) is rapidly ebbing away. Culpability, however, is not the exclusive preserve of the Israeli military. Which country sells them arms? Which country alone has the power within the international community to call Israel off? Which country has actively sought conflict in the Middle East for its own pecuniary benefit?

What makes a terrorist?

Returning to Arundhati Roy’s The Algebra of Infinite Justice once again, the Foreword written by John Berger is pretty entertaining. He waxes lyrical about Roy’s essays but makes one or two observations of his own. On the issue of terrorism he contends that what makes a terrorist is despair; a level of despair that few in the First World can imagine. This despair Berger describes as ‘the sense that your life and the lives of those close to you count for nothing. And this is felt on several different levels so that it becomes total’. He cites living for decades on a refugee camp as an example.

END_OF_DOCUMENT_TOKEN_TO_BE_REPLACED

Image source: http://www.motherjones.com/news/outfront/2004/01/12_400.html
In openDemocracy this week, David Rose, has written a short piece about his book, Guantánamo, to be published next month by Faber. The article includes some interesting hyperlinks that are well worth a visit, especially the Gitmo link that goes to a MotherJones.com article describing some of the goings-on at Guantánamo. Even senior Pentagon officials have expressed concern about the continued detention of many of the interns who include, among others, three young teenage boys, deaf and elderly men, and many who just happened to be in the wrong place at the wrong time. Sadly, as Rose observes, ‘if Guantánamo has provided but a few meagre scraps of information, it has also become an icon of oppression throughout the developing  and especially the Muslim  world’. The case that Guantánamo is ‘legally and morally questionable is overwhelming’, he argues, and even viewed in terms of its own stated mission  to stop further terrorist attacks  it has proved ineffective.

Finally got around to watching Farenheit 9/11 on Friday night. Michael Moore isn’t everyone’s ‘cup of tea’ (I was a little irritated by his style in Stupid White Men, for example) but he actually maintains quite a low profile in this film, leaving the limelight to the main character, President George W. Bush. It is a ‘must see’ movie although I did find the whole thing rather distressing. I watched it in a Dublin movie theatre and, needless to say, there was a very sympathetic audience (complete with a ripple of applause at the end!) The more important question, of course, will be how the film will be received in the US.

So now we have March 11th to go with September 11th, but no-one could be this calculating surely?

Recent articles in the conservative press (e.g. by Martin Wolf in the Financial Times, reproduced below in full) have hailed the PSOE election victory as a win for al-Qaida. I can’t help but think that this is an insult to the intelligence of the Spanish electorate. For a counter view, see A victory for Spain, not al-Qaida by Ivan Briscoe, at openDemocracy. Note, you may have to register first. This is free and well worth the effort, IMHO, as the quality of the writing at this site is generally of a very high standard.

END_OF_DOCUMENT_TOKEN_TO_BE_REPLACED

An eye for an eye makes the world blind

Amrozi, a.k.a ‘the smiling assassin’ will now face the firing squad for his hand in the Bali bombing. I can’t help agreeing with Susanna Miller, one of the relatives of the British victims, who considers it an inappropriate punishment.