Community engagement: not something you do after work


In this presentation, I essentially make the point that community engagement should not be viewed as an add-on; an act of charity or something purely philanthropic.

Doing what you love, and loving what you do has become a bit of cliche, but it is not just the route to personal fulfilment. In a resource-constrained,  post-GFC world, with the imminent threat of potentially catastrophic climate change, building socially and ecologically resilient communities is of critical importance.

Community engagement, therefore, should not just be something you do in your spare time. It needs to be the way you live your life. I should define who you are.

Ray Anderson on the Take-Make-Waste model

There have been numerous tributes to Ray Anderson who passed away this week. This one from Paul Hawken — the man who inspired him through his book The Ecology of Commerce — is the eulogy he read out at Ray’s memorial service on Thursday. He sums up by describing Anderson as ‘the greatest man of industrial ecology’. I think few people who are familiar with his work would argue with this evaluation.

Spending money we don’t have, on things we don’t need, to create impressions that won’t last, on people we don’t care about

I’ve wondered for some time now, why a mainstream political party doesn’t use an alternative measure to GDP as a major plank of its political platform (e.g. Genuine Progress Indicator, or Index of Sustainable Economic Welfare). The use of GDP growth as a barometer of societal well-being is entirely inappropriate, a view supported by none other than the principal architect of the concept, Simon Kuznets. Bhutan has its Gross National Happiness but for everyone else, the growth of GDP remains the key macroeconomic indicator. The arguments presented in Tim Jackson’s new book Prosperity Without Growth warrant serious consideration. This TED talk draws on the key themes of his book. 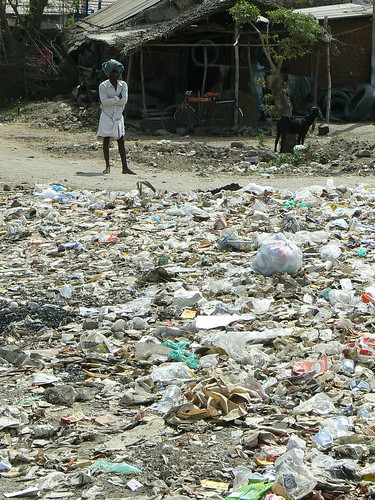 As an anti-plastic bag nazi and frequent traveller to India, this news item caught my attention today. This is not the first time the authorities in Delhi have shown some environmental leadership. It was the first city to introduce the use of compressed natural gas (CNG) for public transport in 1998 with startling results, and now it has introduced jail sentences of up to five years if people are caught using plastic bags!

The ravages of conspicuous consumption

There was an interesting piece in the Indian Express a couple of weeks ago by Gautam Bhatia, that highlighted the dangers of a country like India aspiring to be like the United States. Resource consumption will increase dramatically but so will the generation of waste. Sadly, in a rapidly developing economy like India, conspicuous consumption is the order of the day, even — as the Bhatia piece points out — in the construction of so-called green buildings, where glitz and glamour take precedence over what makes sense economically. If there were policy settings (in India and elsewhere) that incentivised the development of a service and flow economy — as opposed to one based on consumption — where those providing the services would be responsible for the disposal of the associated waste, this might encourage design more compatible with recycling and reuse, and we might avoid becoming one giant global rubbish dump.

The big news occupying the headlines at the moment is that — shock, horror — food prices are rising because of short supplies. With burgeoning population growth (a doubling in the last half century!), climate change affecting harvests (e.g. Australia), an increasingly wealthy Asian population demanding a high protein diet (i.e. meat), and a declining area of arable land due to ecological degradation, you don’t have to be a brilliant economist to calculate the effects of these market dynamics. It doesn’t help, of course, that the price of oil continues to rise adding to farmers’ costs. To address this problem some governments, in their infinite wisdom, have encouraged the production of biofuels, increasing the competition for land, and causing the price of foodstuffs to rise further.

Most at risk are the world’s poor and there have been riots in the streets in places like Egypt, Cameroon, Ivory Coast, Senegal, Burkina Faso, Ethiopia, Indonesia, Madagascar, the Philippines and Haiti in the past month. How much air time has been given to this unrest in the media? Very little when there are much more important issues to focus upon like the US Democratic Party primaries. In a globalised world, however, this is something from which the West cannot insulate itself. Famine in developed countries? As inconceivable as this sounds, without strong political leadership to address the sources of the current agricultural crisis, things can only get worse.

Early last year, the British Labour government announced — with much fanfare — that it planned to build five new carbon-neutral eco-towns. A classic win-win scenario, these new settlements would be built on ‘brownfield’ sites and, besides being eco-friendly, would provide affordable housing. Now things may not be as rosy as they first appeared, as it seems greenfield sites are being targeted. Let’s hope there is a sufficient political backlash for the Brown government not to roll over for the developers.

One of my pet hates is plastic bags. They add millions of tonnes to landfill each year and can take up to 1000 years to decay. In some European countries you have to pay for them, and in other countries there are campaigns to get rid of them or reduce use. Singaporeans, meanwhile, seem to love them. It therefore came as a welcome surprise a month or two ago when my local supermarket introduced reusable shopping bags. The only problem was that they were located beyond the checkout (see above). I walked through to get some and put them on the counter and then, to my astonishment, the woman on the checkout promptly put them inside a plastic bag! I’m not much of a consumer activist, but I couldn’t let this matter drop. I contacted Mr Dennis Tan at Cold Storage Customer Service and he has very kindly intervened. As of last week the environmentally friendly shopping bags are in a prime position (in between the milk and chocolate). All Cold Storage has to do now is train its staff to encourage customers to use these bags.