Remember the old days when we had to go to class? There is a nice article in The Chronicle this week by Jeffrey R Young entitled, Actually Going to Class, for a Specific Course? How 20th-Century. I liked this piece not because it told me anything new, but because of the sub-text that it is incredulous so many academic institutions still trot out the same tired old didactic teaching model and believe they are providing a high quality learning experience. “There is definitely a broader array of options available to students who wish to forgo the commute to class altogether in exchange for online classes that essentially provide the same content that professors regurgitate to students in lectures,” says one student in the article. Frankly, there were a sufficient number of options when I made my PowerPoint slides available ahead of class back in 1996. Now there is a veritable cornucopia of options! Who in their right mind would go to a lecture nowadays unless you were guaranteed some form of active engagement or ‘edutainment’ from an academic with stand up comedy skills?

[youtube=http://www.youtube.com/watch?v=eW3gMGqcZQc]
Just signed up for my first MOOC — a massive open online course — which starts on 12 January and runs for 12 weeks. It should be an interesting experience and by the end of it I hope to have greater clarity on some of my thinking on this type of pedagogy. It will also be a good opportunity to try out some of my new educational iPad apps like GoodReader!

There was an interesting piece in the The Chronicle of Higher Education earlier this month entitled India’s Company Classrooms Challenge ‘Chalk and Talk’ Colleges. The reason it is interesting, is that I’m not entirely sure the corporate universities are challenging the didactic pedagogy so commonplace in Indian institutions of higher education. In the Infosys case cited, the key difference, it would seem, is that PowerPoint is preferred to the chalkboard. The fact the wifi is turned off during class time would seem to indicate that Web 2.0 approaches to learning are yet to be readily accepted.

The Indian corporate sector has been complaining loudly about the inability of the higher education system to produce ‘job ready’ graduates for some time, some estimating that only one in four graduates possess the requisites skills. As a consequence, a new market player has emerged that is rather quaintly referred to as ‘finishing school’. This is not somewhere in Switzerland where the British aristocracy send their daughters to learn deportment, it’s a modest looking facility in the outskirts of an India metro where recent graduates learn the soft skills to enable them to participate as fully fledged members of the global workforce.

There is every chance that this segment of the Indian education industry will continue to expand for some time yet because success in education and success in the business world is chalk and cheese [pun intended]. Indian students will continue to ‘mug up for exams’ — a phrase in common parlance in the UK in the 1950s — because very little has changed within the Indian university sector since the 1950s. The focus is on teaching not learning, and testing memories not problem-solving skills. Industry, meanwhile, requires life-long learners and problem solvers.

Apologists for the system will no doubt point out that at every top university and leading corporate in the world you will find well-educated Indians. This, of course, is a product of the law of large numbers. These people have succeeded in spite of the system. Imagine what could be achieved if there were widespread acceptance of a learner-centric, technology-enhanced, participatory pedagogy with authentic assessment. To date, there has been very little incentive for institutions of higher education to change. With the opening up of the Indian education system to foreign competition, domestic institutions may be forced to reflect on their outdated practices.

Predictions from Bill Gates on textbooks

[youtube=http://www.youtube.com/watch?v=Iqf3rvg742g]
The man who said that “640K ought to be enough for anybody” (which he denies) and who failed to anticipate the growth of the Internet is predicting that, five years from now, the best education will come from the Web. Given his powers of under-estimation, one might speculate that the best education could be web-based in three years’ time, or maybe it’s available now, given the creative ways social media might be harnessed for education purposes, and it’s just a question of taking advantage of it.

A lot has been written in the last year or so about how twitter might be used in the classroom, and it has even been suggested that it could conceivably replace a course management system. Jane Hart at the Centre for Learning & Performance Technologies has taken this thinking one step further and set up a site called 140 University, “to build and extend your general education”, but “short courses delivered via Twitter and Facebook” are slated for delivery in the near future. Is it possible that formally certified, accredited academic courses could be delivered in 140-character tweets any time soon? Now that would be disruptive innovation taken to the nth degree!

In this interview, Curtis Bonk discusses how a new breed of teacher is set to emerge; what he refers to as a ‘super eCoach’, or ‘super eMentor’. These people, he says, will have three skills: (i) domain expertise, (ii) an understanding of how to use the Internet for learning, and (iii) counselling skills that further human development. These people will be in high demand, Bonk opines, because not many people are ‘thinking about Google from an educational point of view’. Educators need to become content curators, re-purposing and remixing material, to help learners navigate their way through the content without becoming overwhelmed by the huge volume of information. In other words, it is about guiding learning so that students can process the plethora of information in an orderly fashion, to convert it into knowledge and understanding. 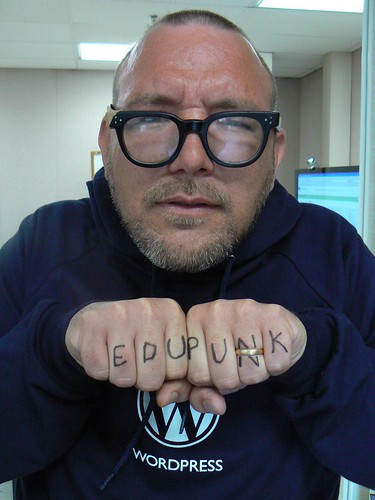